In 2014, General Julia Cleckley published her autobiography titled A Promise Fulfilled, that tells the story of her story as a wife and mother while serving in the National Guard. She is currently President and CEO of Cleckley Enterprises, a speaking and consulting firm, and lives in Boynton Beach, Florida. As a 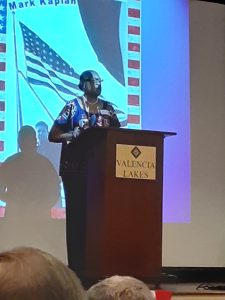 retired U.S. Army Officer, General Cleckley began her career as a Private rising to the rank of General Officer. General Cleckley joined the National Association of American Veterans, Inc. as a Senior Board Advisor 12 years ago to offer her experience in the areas of Human Resources (taking care of people through training and management in the organization), Leadership (showing responsibility and accountability as well as the act of guiding and motivating goals that are set), Mentoring, the key to insuring guidance and success; and showing Diversity that means focusing on empowering and inspiring our nation’s Servicemembers and Veterans to reach their goals. Her motto is “dream big, keep the faith and work hard!”

In November 2021, Brigadier General Julia J. Cleckley was featured in the Veterans Day Issue of the Valencia Lakes the ECHO as a new Veteran resident to the Valencia Lake Community in Florida. Shortly after Veterans Day the Valencia sponsored an event to further honor our nation’s Veterans with the installation of a new, grander flagpole, befitting these men and men, as well as their community. 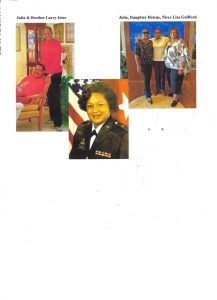